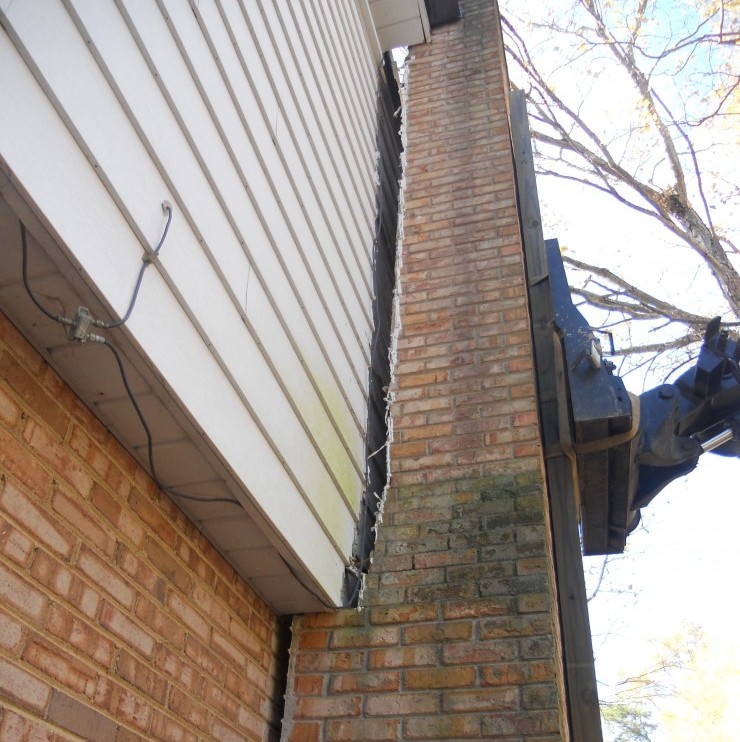 A leaning chimney is very common in the Southeast, and especially in the Carolinas. Several factors can cause a chimney to settle and therefore lean away from the house. Common causes are expansive soils, poorly compacted backfill soils and poor drainage.

Throughout our service areas of North and South Carolina— chimney settling is very prevalent during severe drought conditions. The soil, if expansive, will literally shrink and contract. If the soil under the chimney foundation begins to change properties, the chimney will shift. The most visible sign of a settling chimney is a separation between the brick and the adjacent siding. It may look like the chimney is leaning away from the house.

Other signs you might need leaning residential chimney repair include:

What to Do If Your Chimney Is Leaning or Falling

The most common solution for leaning chimney repair is to install a helical pier underpinning system. This system installs underneath the settling foundation to provide permanent support and stop future settlement. In many cases, the helical pier system can be used to raise and level the settled portion of the foundation.

In this sort of leaning residential chimney repair service, the piers are simply drilled down into the soil strata to reach more firm, stable soil below. Then, a bracket is attached to the foundation to provide permanent support. The helical piers can be loaded immediately and create very little disturbance to the surrounding landscape.

In some cases, FRS installs a micropile underpinning system. This system works basically like the helical pier system described above, but is used in certain soil or loading conditions. If very high load capacities are needed or rock is encountered in the soil strata, then micropiles are typically used.

If you are looking for leaning chimney repair in Charlotte, North Carolina, or anywhere in the Carolinas or the Southeast, Foundation Repair Services is here for you. Since our founding in 2004, we’ve been the company clients trust to handle a variety of commercial, builder and residential issues. What sets us apart is our quality. We are a licensed contractor, held to the highest standards of work and ethics. Come to us for honest work, competitive pricing, clear communication and incredible flexibility. Request an appointment now.